Future Spacecraft - And How They Will Land On New Planets

How future spacecraft might handle tricky landings on Venus or Europa 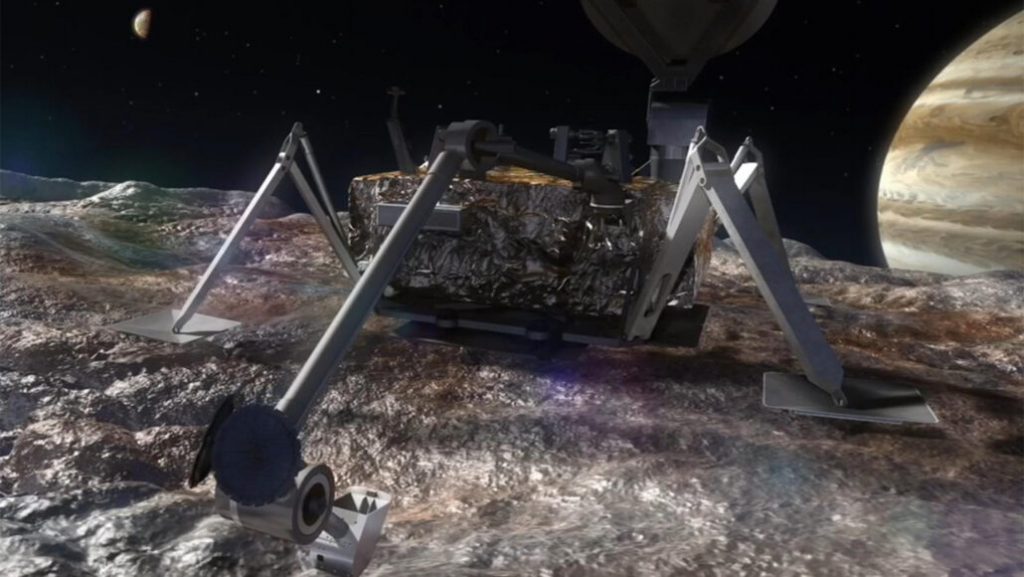 The best way to know a world is to touch it. Scientists have observed the planets and moons in our solar system for centuries, and have flown spacecraft past the orbs for decades. But to really understand these worlds, researchers need to get their hands dirty — or at least a spacecraft’s landing pads.

Since the dawn of the space age, Mars and the moon have gotten almost all the lander love. Only a handful of spacecraft have landed on Venus, our other nearest neighbor world, and none have touched down on Europa, an icy moon of Jupiter thought to be one of the best places in the solar system to look for present-day life (SN: 5/2/14).

Researchers are working to change that. In several talks at the virtual American Geophysical Union meeting that ran from December 1 to December 17, planetary scientists and engineers discussed new tricks that hypothetical future spacecraft may need to land on unfamiliar terrain on Venus and Europa. The missions are still in a design phase and are not on NASA’s launch schedule, but scientists want to be prepared.

Venus is a notoriously difficult world to visit (SN: 2/13/18). Its searing temperatures and crushing atmospheric pressure have destroyed every spacecraft lucky enough to reach the surface within about two hours of arrival. The last landing was over 30 years ago, despite increasing confidence among planetary scientists that Venus’ surface was once habitable (SN: 8/26/16). That possibility of past, and perhaps current, life on Venus is one reason scientists are anxious to get back (SN: 10/28/20).

In one of the proposed plans discussed at the AGU meeting, scientists have ridged, folded mountainous terrain on Venus called tessera in their sights. “Safely landing in tessera terrain is absolutely necessary to satisfy our science objectives,” said planetary scientist Joshua Knicely of the University of Alaska Fairbanks in a talk recorded for the meeting. “We have to do it.”

Knicely is part of a study led by geologist Martha Gilmore of Wesleyan University in Middletown, Conn., to design a hypothetical mission to Venus that could launch in the 2030s. The mission would include three orbiters, an aerobot to float in the clouds and a lander that could drill and analyze samples of tessera rocks. This terrain is thought to have formed where edges of continents slid over and under each other long ago, bringing new rock up to the surface in what might have been some version of plate tectonics. On Earth, this sort of resurfacing may have been important in making the planet hospitable to life (SN: 4/22/20).

But landing in these areas on Venus could be especially difficult. Unfortunately, the best maps of the planet — from NASA’s Magellan orbiter in the 1990s — can’t tell engineers how steep the slopes are in tessera terrain. Those maps suggest that most are less than 30 degrees, which the lander could handle with four telescoping legs. But some could be up to 60 degrees, leaving the spacecraft vulnerable to toppling over.

“We have a very poor understanding of what the surface is like,” Gilmore said in a talk recorded for the meeting. “What’s the boulder size? What’s the rock size distribution? Is it fluffy?”

So the lander will need some kind of intelligent navigation system to pick out the best places to land and steer there. But that need for steering brings up another problem: Unlike landers on Mars, a Venus lander can’t use small rocket engines to slow down as it descends.

The shape of a rocket is tailored to the density of air that it will push against. That’s why rockets that launch spacecraft from Earth have two sections: one for Earth’s atmosphere and one for the near-vacuum of space. Venus’ atmosphere changes density and pressure so quickly between space and the planet’s surface that “dropping a kilometer would go from the rocket working perfectly, to it’s going to misfire and possibly blow itself apart,” Knicely says.

Instead of rockets, the proposed lander would use fans to push itself around, almost like a submarine, turning the disadvantage of the dense atmosphere into an advantage.

The planet’s atmosphere also presents the biggest challenge of all: seeing the ground. Venus’ dense atmosphere scatters light more than Earth’s or Mars’ does, blurring the view of the surface until the last few kilometers of descent.

Worse, the scattered light makes it seem like illumination is coming from all directions at once, like shining a flashlight into fog. There are no shadows to help show steep slopes or reveal big boulders that the lander could crash into. That’s a major issue, according to Knicely, because all of the existing navigation software assumes that light comes from just one direction.

Sticking the landing on Europa

Jupiter’s icy moon Europa, on the other hand, has no air to blur the surface or break rockets. A hypothetical future Europa lander, also discussed at the AGU meeting, would be able to use the “sky crane” technique (SN: 8/6/12). That method, in which a platform hovers above the surface using rockets and drops a spacecraft to the ground, was used to land the Curiosity rover on Mars in 2012 and will be used for the Perseverance lander in February 2021.

“The engineers are very excited about not having to deal with an atmosphere on the way down,” said spacecraft engineer Jo Pitesky of NASA’s Jet Propulsion Laboratory in Pasadena, Calif., in a recorded talk for the meeting.

Still, there’s a lot that scientists don’t know about Europa’s surface, which could have implications for any lander that touches down, said planetary scientist Marissa Cameron of the Jet Propulsion Laboratory in another talk.

The best views of the moon’s landscape are from the Galileo orbiter in the 1990s, and the smallest features it could see were half a kilometer across. Some scientists have suggested that Europa could sport jagged ice spikes called penitentes, similar to ice features in the Chilean Andes Mountains that are named for their resemblance to hooded monks with bowed heads — although more recent work shows Europa’s lack of atmosphere should keep penitentes from forming.

Another mission, the Europa Clipper, that’s already underway will take higher-resolution images when the orbiter visits the Jovian moon later this decade, which should help clarify the issue.

In the meantime, scientists and engineers are running elaborate dress rehearsals for a Europa landing, from simulating ices with different chemical compositions in vacuum chambers to dropping a dummy lander named Olaf from a crane to see how it holds up.

“We have a requirement that says the terrain can have any configuration — jagged, potholes, you name it — and we have to be able to conform to that surface and be stable at it,” says John Gallon, an engineer at the Jet Propulsion Laboratory. (The dummy lander was named for his 4-year-old daughter’s favorite character in the movie Frozen.)

Over the last two years, Gallon and colleagues have tested different lander feet, legs and configurations in a lab by suspending the lander from the ceiling like a marionette. That suspension helps simulate Europa’s gravity, which is one-seventh that of Earth’s.

Without much gravity, a massive lander could easily bounce around and damage itself when trying to land. “You’re not going to stick the landing like a gymnast coming off the bars,” Gallon says. His team has tried sticky feet, bowl-shaped feet, springs that compress and push into the surface and legs that lock to help the lander stay put on various terrains. The lander might crouch like a frog or stand stiff like a table, depending on what type of surface it lands on.

Although Olaf is hard at work helping scientists figure out what it will take to build a successful Europa lander, the mission itself, like its Venusian counterpart, remains only on some planetary scientists’ wish lists for now. Meanwhile, other researchers dream about voyages to entirely different worlds, including Saturn’s geyser moon Enceladus.

“Some people will pick favorites,” Cameron says. “I just want to land someplace we’ve never been to that’s not Mars. I’d love that.”