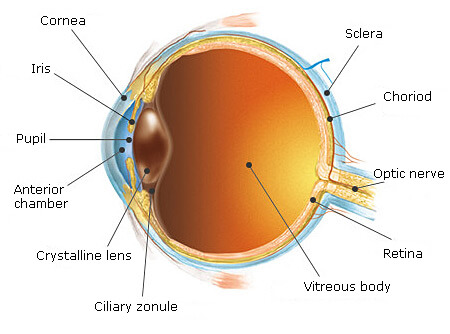 Stucture of the Eye

“The cornea focuses most of the light, then it passes through the lens, which continues to focus the light,” explained Dr. Mark Fromer, an ophthalmologist and retina specialist at Lenox Hill Hospital in New York City. [The 7 Biggest Mysteries of the Human Body]

Behind the cornea is a colored, ring-shaped membrane called the iris. The iris has an adjustable circular opening called the pupil, which can expand or contract to control the amount of light entering the eye, Fromer said.

Ciliary muscles surround the lens. The muscles hold the lens in place but they also play an important role in vision. When the muscles relax, they pull on and flatten the lens, allowing the eye to see objects that are far away. To see closer objects clearly, the ciliary muscle must contract in order to thicken the lens.

The interior chamber of the eyeball is filled with a jelly-like tissue called the vitreous humor. After passing through the lens, light must travel through this humor before striking the sensitive layer of cells called the retina.

Fromer explained that the retina is the innermost of three tissue layers that make up the eye. The outermost layer, called the sclera, is what gives most of the eyeball its white color. The cornea is also a part of the outer layer.

The middle layer between the retina and sclera is called the choroid. The choroid contains blood vessels that supply the retina with nutrients and oxygen and remove its waste products.

Embedded in the retina are millions of light sensitive cells, which come in two main varieties: rods and cones.

Rods are used for monochrome vision in poor light, while cones are used for color and for the detection of fine detail. Cones are packed into a part of the retina directly behind the retina called the fovea, which is responsible for sharp central vision.

When light strikes either the rods or the cones of the retina, it’s converted into an electric signal that is relayed to the brain via the optic nerve. The brain then translates the electrical signals into the images a person sees, Fromer said.

The most common problems with vision are nearsightedness (myopia), farsightedness, (hyperopia), a defect in the eye caused by nonspherical curvature (astigmatism) and age-related farsightedness (presbyopia), according to the National Eye Institute.

Most people will develop presbyopia in their 40s or 50s, and start needing reading glasses, Fromer said. With age, the lens gets denser, making it harder for the ciliary muscles to bend the lens, he said.

The leading causes of blindness in the United States include cataracts (clouding of the lens), age-related macular degeneration (deterioration of the central retina), glaucoma (damage to the optic nerve), and diabetic retinopathy (damage to retinal blood vessels), according to the Centers for Disease Control and Prevention (CDC). Other common disorders include amblyopia (“lazy eye”) and strabismus (crossed eyes), the CDC says.