Quokka are adorable small marsupials about the size of a house cat. They are very sociable friendly animals even with humans! They’ve become a bit of a selfie sensation, with tourists and locals flocking to take their very own selfie with an ever grinning quokka. 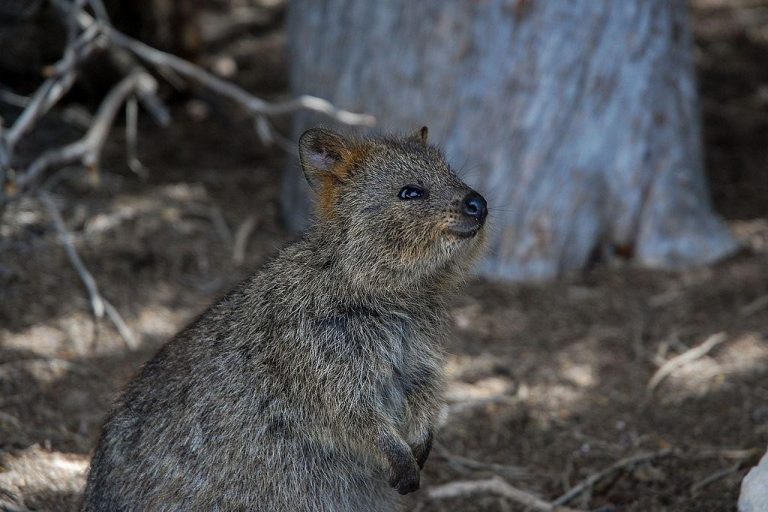 Quokka range from 5-11 lbs and reach about 21 inches long with a 10 in tail. They are extremely endearing with their rounded ears and big black eyes, and cute button nose. They are rather stocky and short with powerful hind legs. Their fur is very short and coarse with a brown grizzled coloration. Their paws and feet are dark brown. In the wild quokka can live to 10 years of age.

Quokka live exclusively in the southwestern edge of Australia. They originally inhabited an area of about 16,000 sq miles and were extremely abundant. Following World War I there was significant colonization and increased development of southwestern Australia. Red foxes were introduced by Europeans which proved dangerous predators for the local quokka. As civilization expanded in the area, dogs and cats from locals also began preying on the quokka. To hide and escape these new predators, the quokka relied heavily on widespread dense brush. Unfortunately this brush has been increasingly rare, as logging, agriculture, and housing developments have encroached. From the 1930’s to the 1990’s the quokka population fell steadily. Their habitat range also shrunk by over half.

Today the quokka are found in three isolated populations: the mainland, Rottnest Island, and Bald Island.  Populations on the mainland are more fragmented and experience higher rates of predations, as expected. Roughly 4,000 live on the mainland. The mainland quokka are also at increasing risk from wildfires. A local wildfire decimated a small population of quokkas on the mainland in 2015, killing over 90% of the 500 individuals. Predators and fire pose much less of a threat on the two islands. 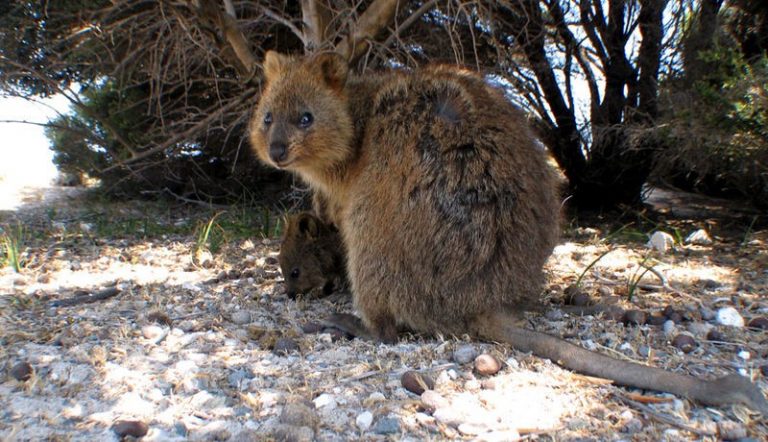 Rottnest Island has become a tourist hotspot, located only 11 miles off the coast of mainland Australia. The island has no cars and is only 8 sq miles. The island was named by a Dutchman in the late 1600’s, who described the quokka as similar to a rat and named the island Rotte nest, meaning ‘rat’s nest’. The only predators for quokka on Rottnest Island are snakes, allowing the quokka population to flourish there. This large population does pressure the island’s capacity by consuming so much vegetation, especially tea tree and pine seedlings. These are among the favorite quokka meals! During harsh seasons the population can dramatically drop when individuals die of starvation or dehydration. Current population numbers on the island are approximately 12,000. Bald Island is located a mile off southern Australia’s mainland and is roughly 3 sq miles. This island has no natural predators of the quokka. About 1000 quokka live on Bald Island.

Quokka live rather relaxed lives! They love to lounge during the day among shrubs, especially Acanthocarpus preissii which is a short prickly perennial. The shrubs provide shade for their daytime sleeping and in the evenings the quokka come out to forage. This makes them nocturnal animals. They primarily edge grasses, seedlings, saplings, and sedges. They have quite high water requirements, but can go months without consuming any water. Their daily water needs are provided by all the vegetation they eat. This is especially useful because Rottnest Island and Bald Island have low yearly precipitation averages. Quokka are like cows, as they consume their food without chewing and then later must regurgitate and chew it as crud.

While quokka are friendly and happy creatures, they lead relatively solitary lives and only show interest during breeding. They don’t form strong family ties or have complicated social structures. Instead quokka really just sleep during the day and eat at night! Female quokka may never interact with another female. Males do sometimes interact with other males, as the largest males do gain some advantages like the best sleeping spots and the best females for mating. At night, when foraging a single quokka may travel over 6 miles. That’s a huge home range for a species that lives in such a space constrained habitat.

Many Mates and Joeys in Pouches

Quokka are very active breeders! Quokka females are ready for mating between August and January. Many females will select their partners carefully, but the mating preferences are complex and vary. Quokka are promiscuous creatures and most have one to five partners. Females often mate immediately after giving birth, but their reproductive systems have developed embryonic diapause to space the pregnancies out. The female’s body keeps the embryo dormant for up to five months. If her first joey doesn’t survive in that time, the embryo will start developing to give her a new joey. 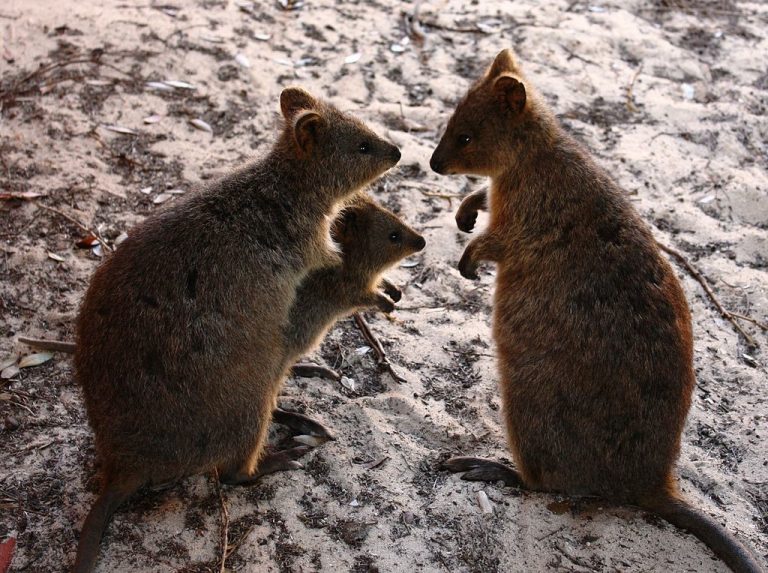 Quokka are marsupials, putting them in a highly specialized class of mammals that give live birth to underdeveloped offspring that then reside inside a pouch to continue development. Females have an extremely short gestation period, and will give birth to one offspring after a month. Baby quokka are called joeys, just like kangaroos and wallabies. Amazingly, immediately after birth baby joey must trek across the mother’s fur into her pouch on their own. The joey remains in the pouch for six months before venturing out at all. For two more months the joey will continue to climb back into the pouch to nurse. At 8 months the joey will completely stop nursing.