These Boats Really Are Floating Upside Down - Here's Why

“A good magician never reveals his secrets.” However, scientists and researchers are fully willing to reveal their secrets. French researchers published a new study showing how rapidly shaking a container of oil or glycerol can cause the liquid to levitate, which allows the boats to float upside down.

“People who came to see the experiment in the lab thought it was a trick or some sort of science fiction”, says Emmanuel Fort, a coauthor of the French study. Even the French researchers were taken by surprise: Fort describes the results as “surprising” and “astonishing”.

This isn’t the first time researchers have been able to make a liquid float. It’s actually been done several times before, using other techniques to make liquids levitate.

Usually, a denser (more dense) substance will sink below a less dense substance. (For example, when water boils, air bubbles rise to the surface of the water, because they are less dense.)

So, normally, the liquid that the researchers used would fall, because it is denser than the air around it. But when the container holding the liquid is shaken rapidly, the liquid acts unnaturally – it defies gravity and stays afloat. The container vibrating actually compresses the air below the liquid, which prevents it from falling down. 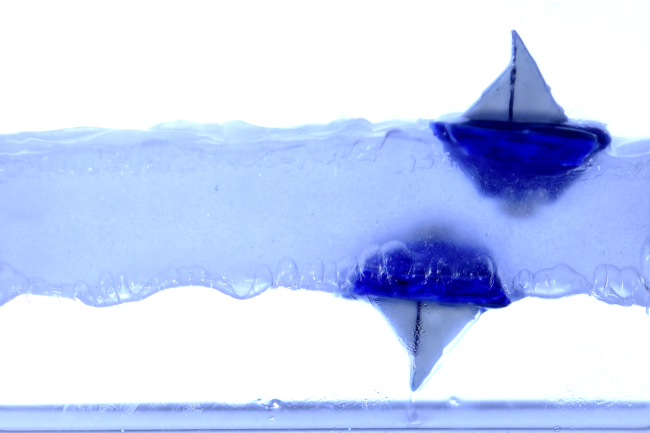 Most of the time when you hear of a boat floating upside down, it’s not a good thing. But these “special” boats, which are simple plastic boats often found in the baths of little kids, float and move like they would on a pond, even when they are upside down.

Ford and his team want to continue to explore the phenomenon. He says, “for example, we’d like to levitate two different liquids in the same container.”

Maybe soon, Ford and other scientists will be able to float humans upside down.