The Blue-footed Booby delights with it’s bright blue feet. Unique coloration is common among birds, especially tropical birds, but is typically reserved to the plumage not appendages. The Blue-footed Booby is a marine animal found exclusively in the eastern Pacific Ocean. The habitats of the booby are limited to the coasts of Southern California and islands off the coast of Peru, but over half of all Blue-footed Boobies nest on the famous Galapagos Islands. 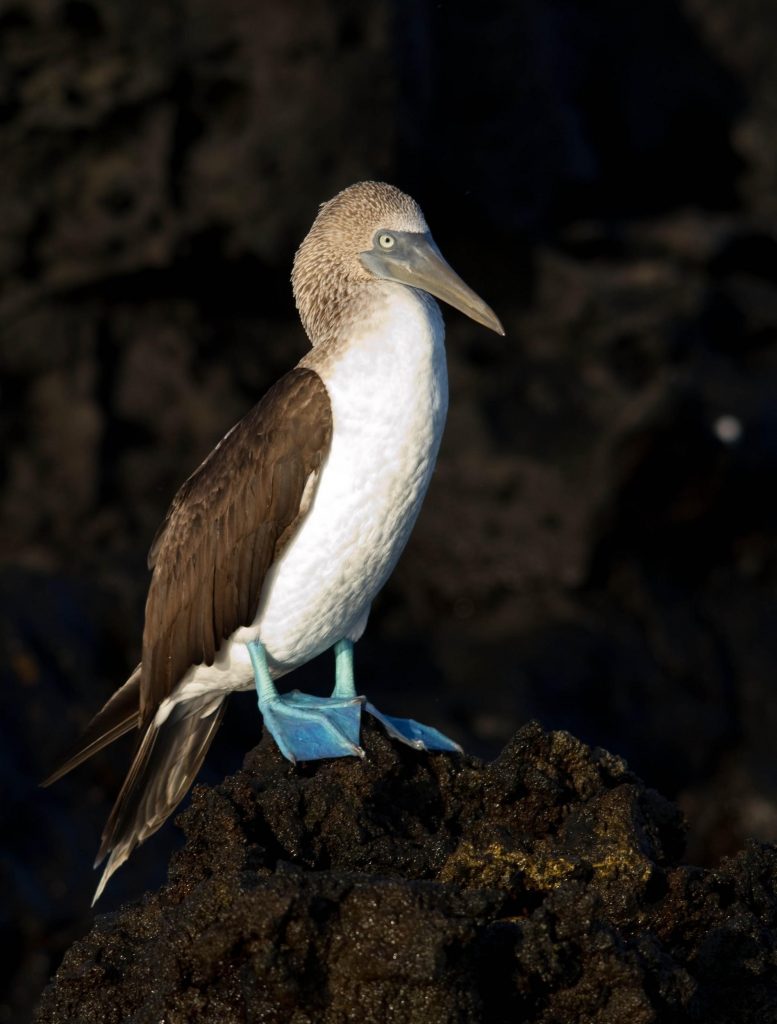 The Galapagos are famous for it’s incredibly unique fauna and its role in the development of Charle Darwin’s Theory of Evolution. 20% of the marine species found on the Galapagos are endemic to the islands, meaning they are found nowhere else! Some other famous Galapagos animals include the Marine iguana, Galapagos tortoise, Flightless cormorant, and many other birds. It remains an important research station for conservation and evolution studies. The islands are also a 27,000 sq mi marine reserve with the goal of preserving the unique habitats and fauna. 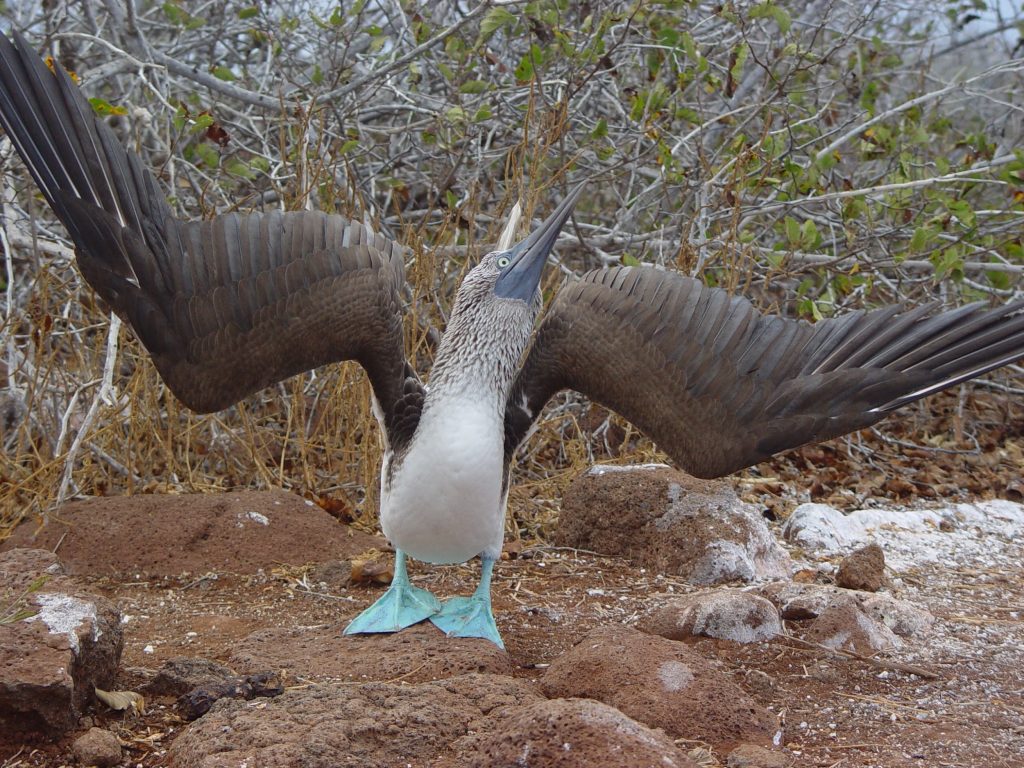 The Blue-footed Booby is roughly 30 inches long and weighs about 3 pounds. While their feet are bright blue, the rest of their bodies are colored similarly to the Peruvian booby. They have dark brown long pointed wings. Their underbelly is pure white, while their neck and head are a light brown color. The nostrils of their long pointed beak is permanently closed because they dive headfirst into water during hunting. The Blue-footed Booby has yellow eyes and exceptional binocular vision because of the placement of their eyes, directly before their beak on either side of their head.

Blue-footed Booby’s get the amazing blue color on their feet from their diet! The carotenoid pigments found in the fish they eat are concentrated in their feet. The color of their feet actually play a really intricate and important role in their mating rituals. A healthy booby will have brighter feet. If a Blue-footed Booby is unable to catch prey for even 48 hours tier foot brightness can significantly decrease. This reliably reveals to a prospective mate the health condition of a booby

Females prefer to mate with younger males that have brighter feet and are able to better provide for the offspring. Females will continually check the health of their partner by keeping an eye on their feet. Male similarly evaluate their mates by monitoring their feets coloration, but also the size and brightness of the female’s eggs. Females that lay large eggs in great condition are highly sought after by males for their reproductive value.

Females are able to begin breeding between 1 and 6 years old, while males are able to breed starting a year later. Boobies form dense colonies because they don’t migrate or disperse from the area where they are hatched. An offspring’s nest in adulthood can be extremely close to where a parents nest was. A booby may defend a few nesting sites before laying their eggs, before settling on one site.

Watching Blue-footed Booby’s during courtship is quite funny! Boobies are monogamous and will usually select and mate with a single partner each season. Males flaunt their feet in attempts to impress the female. In this highly ritualized dance, males approach females by lifting their blue feet to show them off. The male may display their wingspan and their white underbelly by pointing their bill to the sky and spreading their wings. The male also presents gifts to the female, such as pebbles or sticks before laying them at his feet. At this point it is then up to the female to accept or decline the mating offer for the season. They breed roughly every 8 to 9 months.

The female booby will lay two, sometimes three eggs, over four to five days. The mating pair will take turns making sure the eggs are kept incubated under their warm feet. After about 40 days, the chicks will hatch. A natural brood hierarchy develops and a reduction in sibling rivalry because of the asynchronous hatching due to the eggs being laid five days apart. The male will catch fish and then regurgitate the fish for the chicks to eat out of his mouth. It sounds so disgusting! But it really is the best way for birds to deliver food in an accessible way for very young chicks to consume. Baby chicks aren’t able to digest a whole fish on their own.

The Blue-footed Booby hunts by plunge diving straight into the ocean, from heights of up to 100 feet. The birds hit the water at 60 mph and can reach 82 feet below the water surface! Their skulls are specially adapted with air sacs to protect them from the water pressure. Blue-footed Boobies eat small schooling fish like anchovies, mackerel, sardines, and flying fish. Boobies are able to hunt alone but often prefer hunting in parties of 12 where large schools of fish congregate. They will dive in unison after being signaled by the lead bird. Their prey is consumed underwater unless it needs to be brought back to offspring for regurgitation.

In recent years, the Blue-footed Booby has experienced a concerning population decline on the Galapagos Islands, despite it being a protected area. A large study was conducted that determined the species is experiencing difficulties breeding and raising offspring to adulthood. It remains unknown if this decline will continue. 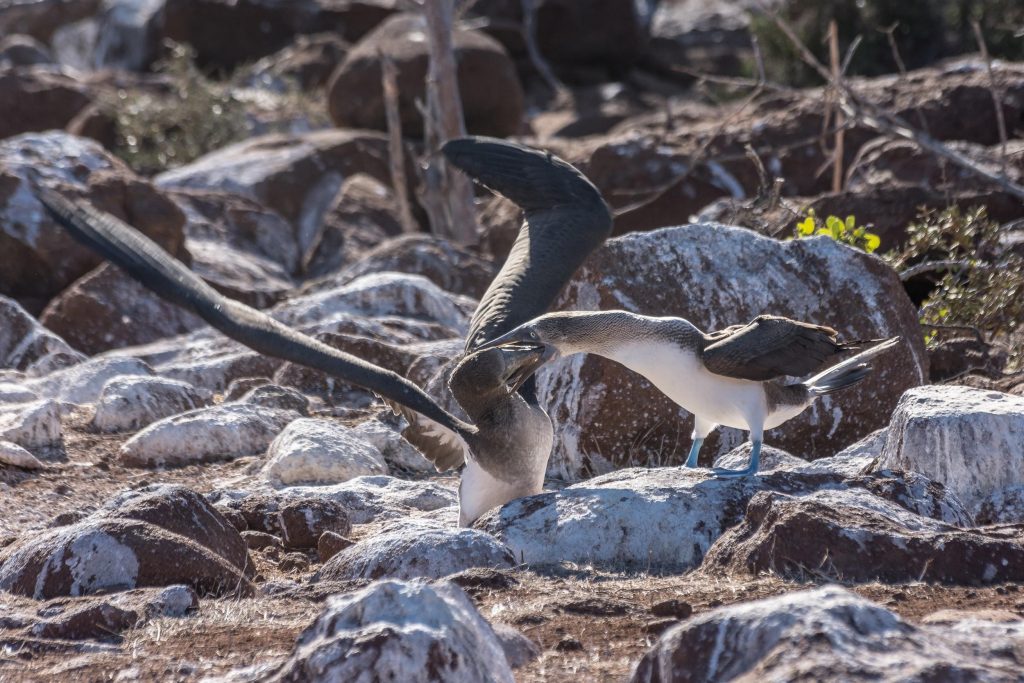 Researchers are searching for a cause to the breeding issues. If the Galapagos Island population relies heavily on sardines for their diet, this may be the cause. The numbers of sardines are declining in the waters surrounding the Galapagos. The sardine decline may be attributed to overfishing of the seas. This demonstrates how ecological effects can be felt all along the food chain, but much more research is needed!